The Sheldon Memorial Trust Schools competition prize in 2016 - 17 was awarded to Year 6 of Haxby Road Primary School: a former pupil, Letitia Jackson, had submitted the winning entry (a letter describing her interest in the Roman period) before leaving to join her secondary school, so that the pupils who followed her into Mrs Thompson’s class were the beneficiaries of her work.

The prize was devised in liaison with Mrs Thompson, who was keen that it include a field trip that could be tied in with recent project work completed by her class of 23 children. Aldborough was selected as an appropriate destination (for its proximity, its facilities, and for the points of comparison that could be made with the city of York).

The prize was delivered in three parts. The first was an outreach session provided by two JORVIK Group members of staff (Frances Bennett, Interpretation and Engagement Manger, plus Fiona Hyde of the JORVIK interactive team) on 5th June, to introduce the class to some principles of archaeology and their application to the study of the Roman period.

The second part of the prize was the field trip on 19th June, led by Chris Tuckley (Head of Interpretation and Engagement, JORVIK Group), and Frances Bennett. We were met on site by Matthew Lester (Education Visits Officer for English Heritage), who directed several of the activities, which included object handling and a mosaic-making activity. The weather was glorious, meaning that the children were able to tour the site (viewing the remains of the town walls and the several mosaics on site) and enjoy an outdoor picnic, before exploring the small on-site museum.

On their return to the school, the group were given a loan box, packed with replica Roman materials and other resources for classroom-based learning, which they retained for the next 4 months.

‘Thank you so much for the wonderful experience you gave to the children. The quality of delivery, the build-up to the trip and the opportunity to extend learning both in and out of the classroom was fantastic. The children thoroughly enjoyed the visit as well as the opportunity to handle well-selected artefacts and the trip to Aldborough was great. The knowledge you gave to the children before the visit made it even more special and enjoyable for them.’ 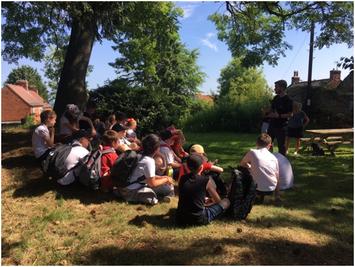 Mosaic work, above and right.

Matthew Lester introduces the site to the class. 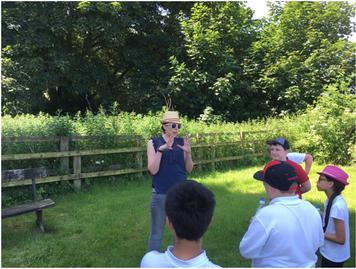 A model of Aldborough’s walls. 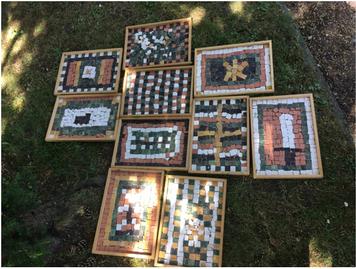 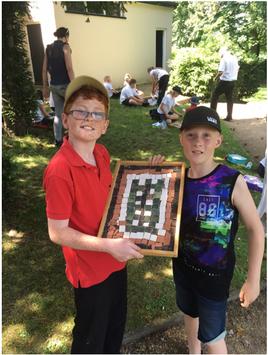 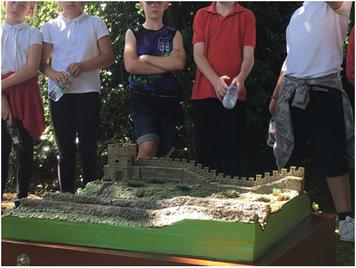 Visiting the site of the Helicon Mosaic. 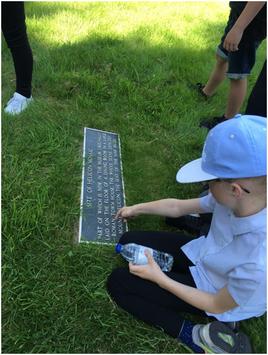